In Don Norman’s The Design of Everyday Things, one of the prime examples of an “interface” (as in “user interface”) are doors and their handles (or the absence of). He explains the concept of affordance using doors. Wikipedia describes “affordance” as “the possibility of action”. The affordance of an object describes what the object tells you about how it can be used, what it “affords you” to do with it. Don Norman explains that e.g. a vertical bar at a door “affords” pulling. A horizontal bar, or even better, no bar at all and instead just a plate at the door, “affords” pushing. This way, you can make it obvious whether a door needs to be pulled or pushed without putting stupid labels for “push” and “pull” on it. Most people will just naturally use doors with such an “interface” correctly, without thinking about it.

Now imagine someone has read Don Norman’s book, studied it all intensively, learned all the rules of how to design good interfaces and what to avoid. They then decide to apply all this knowledge to create the worst door “interface” they can think of. Of course, to create a really bad interface you need some kind of touch interface. But just creating a normal door would be boring, I mean people would quickly forget about it and be at most mildly annoyed if they are made to feel stupid by a simple door they want to go through. To create a truly bad experience, you need to up the ante, make people really rely on that door make them really want to understand how that door works and trust it. If that door fails, it must be truly memorable.

What kind of door could you choose for that? Maybe the front-door of a house? No, whoever lives in that house could learn it and not many other people use it. Maybe the door of a safe, if that fails it would be bad right? But how many safes are there? Almost no one uses a safe. So what’s a door everybody uses daily and really, really relies on being able to control when it opens, when it closes and when it doesn’t open? Right: A toilet door.

Enter “Deutsche Bahn”, the (ex state-operated) German train company1, and their disability-friendly toilets in the double-deck regional trains. I am sure their thought-process must have been something like above, there is no reasonable other explanation. This is what they look like from the outside: 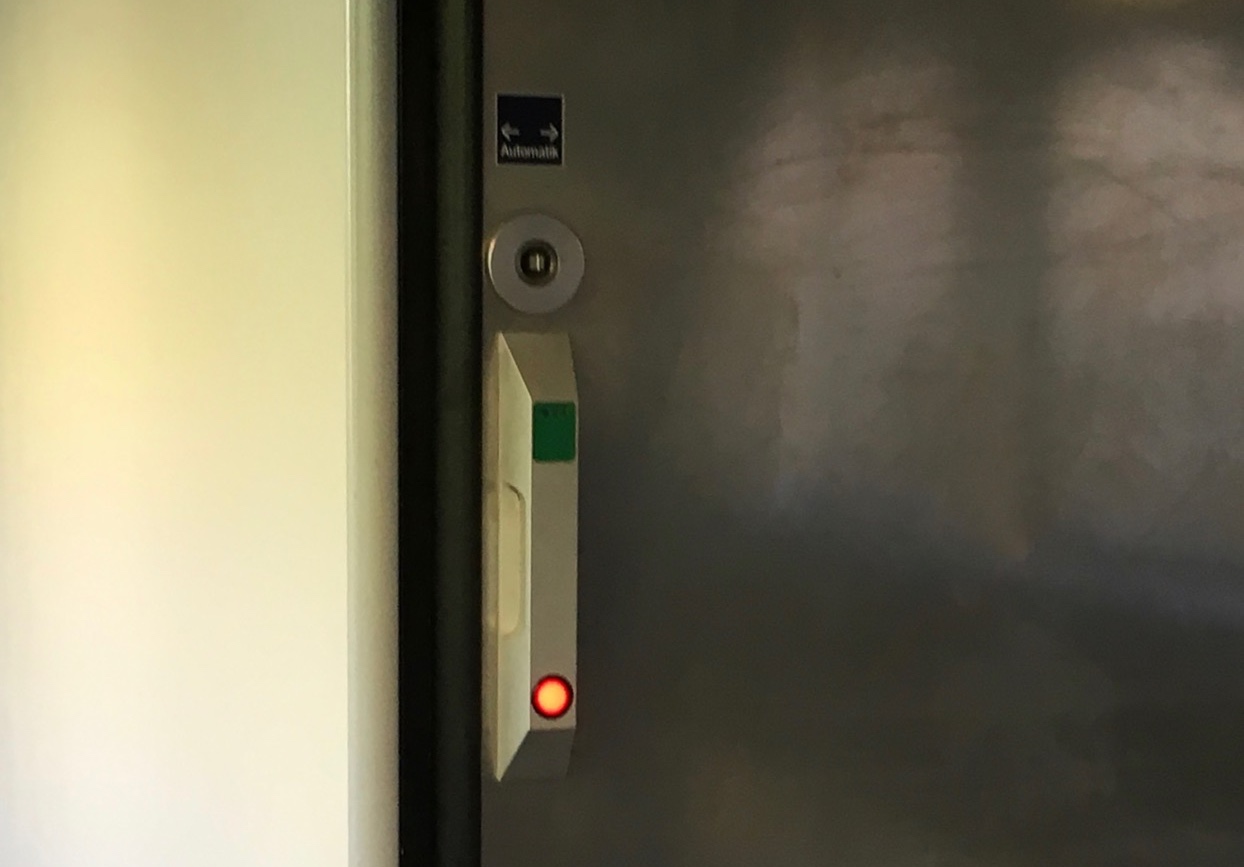 Let’s ignore the obvious mechanical affordances (e.g. vertical bars indicate pulling), as we already know that this is a sliding door. It also has this nice label at the top that says something about “automatic” so we probably can’t just “pull” or “push” it. Instead, we know already from experience with these kinds of door that we need to press some kind of button to open it. But what should we press on?

If you now said “of course it’s the big red circle button at the bottom, I mean it even shines bright red, so you know it’s there!”, you are wrong. But not alone. I’ve sat in front of that toilet door on many train rides2, and many people tried to press that “button”. Now, after you have seen this door in use you will learn that this is actually the “busy” indicator. It shines when the toilet is occupied. This is what this door “handle” looks like when the toilet is free: 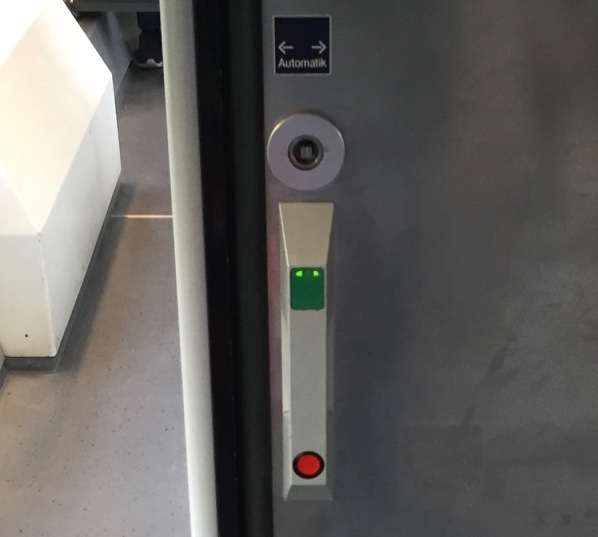 So now the red circle at the bottom does not glow anymore. Instead, there are two green arrows pointing to the sides, inside the green rectangle at the top. If you saw only this picture, you would probably still have a good chance to press the red thing at the bottom. It does look very button-y. But seeing the two states after another, you have a chance of figuring out that the glowing arrows at the top indicate that there is an interface element active now that was disabled before and that it probably means that you should press the green thing at the top. Maybe. Of course, it doesn’t give any haptic feedback when you press it (remember I said you need touch interfaces for a truly bad interface?), but a short moment after you press it you hear a short hissing sound and the door moves to the side. You have passed the first test, you opened the door!3

But opening the door is only the first challenge. What you really want, is to close the door behind you. And this is the real challenge.

So you walk through the door, turn around and see this: 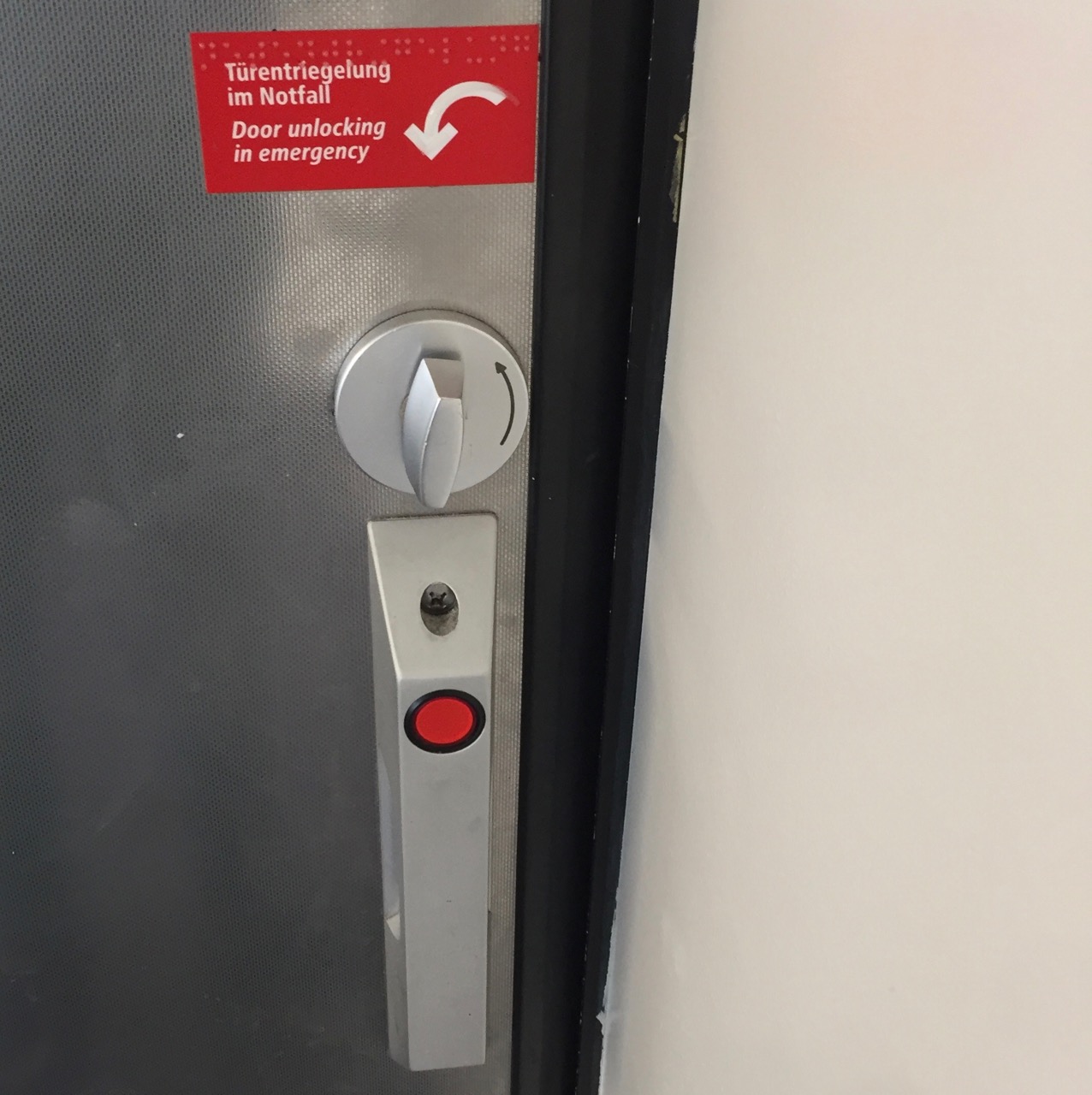 After spending several seconds trying to figure out how to close the door, it closes automatically. Great, so now it’s closed and we are on the inside. We don’t know yet how to get out, but maybe that problem can be solved later. But we do not feel comfortable doing our business without being assured that we will not be disturbed. How do we actually lock this door and prevent someone else from opening it while we are in the middle of things?

Nope, the big red non-button still does nothing. How about this weird mechanical dial above it? The note above says something about emergency unlocking, but everything about this door is so confusing maybe the note is not actually about that dial? So we try to turn it and of course, the door opens.

Turns out it actually was the emergency unlock/opening of the door.

The passengers in front of the toilet are happy to see us again. And we wait, standing inside the toilet room because we still don’t know how to close that door.
Then we reach around and press the green touch area on the outside to make the door close while we are still on the inside.
At least it’s closed now.
But still not locked.

After calming down a bit, we look around. And there, on the right wall, about a meter away from the actual door handle, are some more buttons:

That label says “Open”, so at least we found out how to open the door again without the emergency thing.

Right below, there is another button:

That button’s label says “Schließen”, which means “close”. But “Abschließen” (very similar) in German means “lock”. So when I press this button, does it just close the door, or will it lock it? Maybe if I press it while the door is closed already, it will be locked? Like 2 * close = lock?

But pressing the close-button while the door is closed doesn’t seem to have any effect. And pressing the “open” button to check whether the door is locked (as there is no handle you can try), opens the door again. Hello, dear other passengers, again. Yes, I’ll be done soon. Yes, I know the toilet doesn’t smell all that great.

Ah, but there is one more button below the two others:

The label roughly translates as “when the light blinks, please lock”, which is a bad label in and of itself. At the moment the button doesn’t do anything. But after closing the door again, it starts blinking. And pressing it stops the blinking and makes the red circle at the door shine, so apparently, we finally locked the door!

Now if you trust the system enough after all this, you can now go and do your business. Of course, those three buttons are on the other side of the room from the actual toilet bowl and the room is easily two meters wide to fit a wheelchair. So, if you misunderstood how the locking of the door works and someone were to come along and open the door, while you are inside you have no chance at all to reach those buttons and quickly press the close button again. And you know how long it will take the other person to figure out how to close the door again, once they realized they should not have opened it.

So just relax and trust the technology4.