The content of this blog post applies to all Apple platforms and to most other user-facing operating systems and frameworks. For brevity, I’ll use iOS as an example but almost everything in here can be done similarly on other platforms.

Some time ago I stumbled upon the following code in a project I was working on:

What’s wrong about this you ask? Well, almost everything.

The Localizable.strings files are used to provide translations for strings used within an app on Apple’s platforms. The first one above is the translation-file for German, the second one is for English. E.g. to translate the title of a button we could do the following:

Except NSLocalizedString—and the whole localization system of iOS/macOS—is much more intelligent. E.g. it will find the best matching language. This is what my “Language and Region” settings screen looks like: 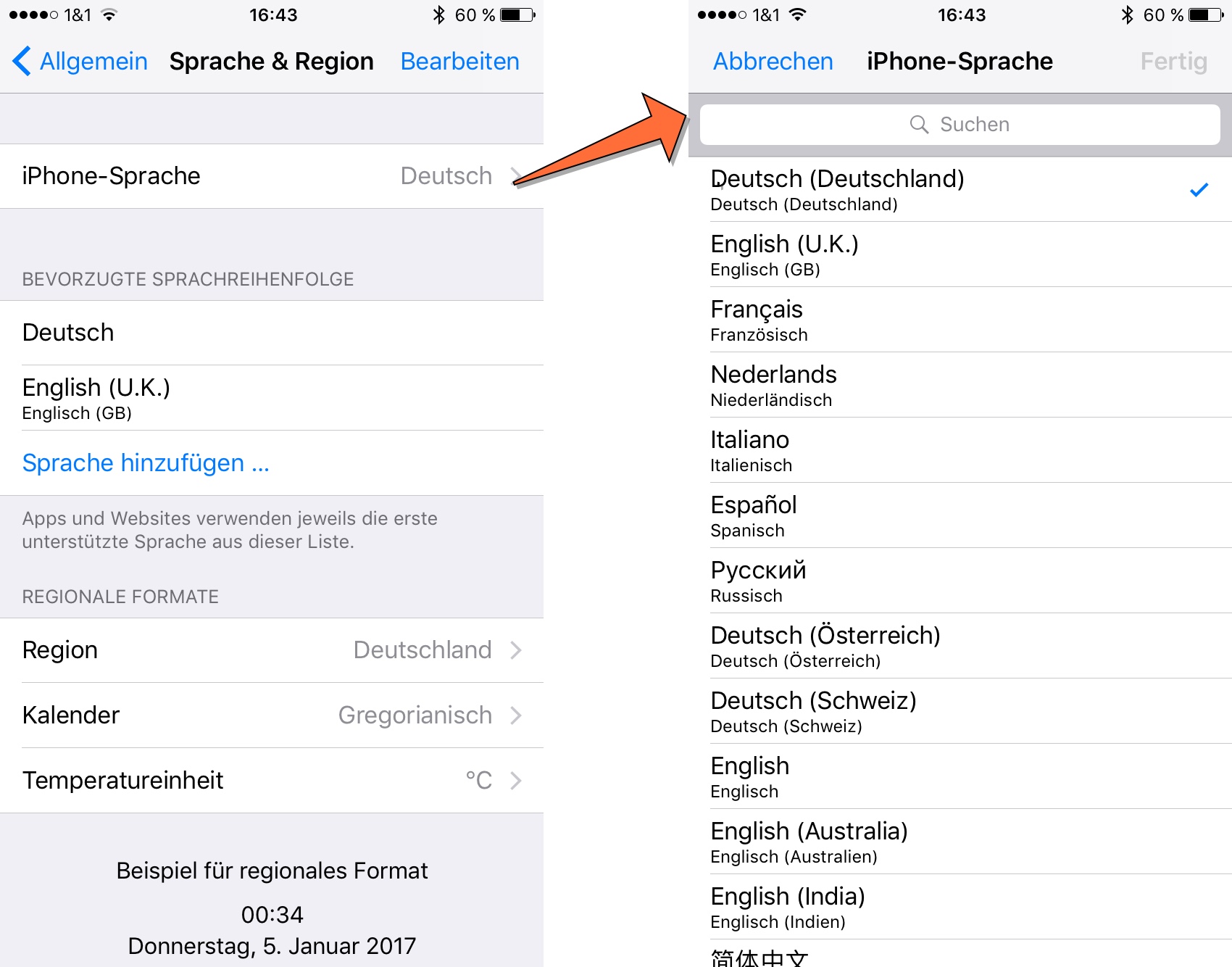 On the first screen, you can see that my iPhone is currently set to German (=Deutsch). But below you see my list of “preferred languages”. This is used to determine what language should be used. If I’m going to use an app that was developed in French, uses French as the default language and is only localized to English but not to German you might assume that the app would be displayed in French to me (as it’s the default language and German isn’t available). But that’s not what happens. Because I have set English as my second choice, the system chooses the English language localization of the app for me. That’s great because my French is really rusty.

But there is one more thing. If you look closely, on the second screen you can see that my language is actually set to “Deutsch (Deutschland)” so it’s actually “German (Germany)” or, to use it’s locale-identifier: de_DE. This specifies the variant of German spoken in Germany in contrast to the one spoken in Austria (de_AT). You are probably more familiar with variants of English like en_UK and en_US. These variants allow you to fine-tune your translations to the specific dialect of a language.

But now let’s look at the example above again. We had translations for en and de, but not for de_DE. Now, if the app’s default language is English, does that mean I would get the app in English because de_DE is not available and neither is my second choice en_UK? So would I have to set my preferred languages to “German (Germany), German (Austria), German (Switzerland), English (U.K), English, English (Australia), English (India)” just to be sure I get a language I like instead of an app’s default language? Again, the system is more intelligent than that. It knows that de_DE is a variant of de and by supplying only a de translation the app developer assures us that this translation works for all variants of German. So even though I never set de as an acceptable language, this is what I will get (which will most likely be what I expect).

Great, so we can have base translations for a language family and we can have specific dialects. So what’s the problem of putting an en_US “CURRENT_LOCALE” key into the en file and using it for the date formatter? Okay, it would use US-American names for the month even for someone from the UK. But last I checked, they spelt at least the month and weekday names the same, so what does it matter?

The problem is that we are not just setting the language of the date formatter by setting its locale but much more. The locale encompasses not only the language (and the dialect) used, but also which currency is used, how numbers are formatted, which calendar to use and, surprise, how dates are formatted. You can specify all that in a locale-identifier, so e.g. en_US@calendar=japanese specifies I want the US-English language variants, all the defaults from the US-region, but a Japanese calendar.

But even if I don’t specify all properties of a Locale in the identifier, the region sets some defaults. So for example, my locale identifier de_DE means the following:

and many other things. If you want to see all the things specified by a Locale, take a look at the documentation by Apple or of your favourite framework.

So an en_US Locale without any other specifiers means the following:

But what does an en_UK Locale default look like? This:

So people2 from the UK apparently agree with the Germans that it should be day-month-year and one should use a 24-hour time format. But they use slashes as separators, instead of the dots used by Germans. Oh, and did you notice that people from the US and Germany are usually happy with the the year specified as 17, whereas people from the UK would also like to know the millenium we are talking about?

So by using the language-file to determine the locale-code, doing that incorrectly (because e.g. en does not autoamtically mean en_US and de does not automatically mean de_DE) and using the resulting code, e.g. en_US, to instantiate and set a Locale on the date formatter, we override the defaults the user has specified in the system preferences. This leads to a user from the UK, or anyone who prefers their apps in a variant of english, getting their dates formatted as 7/28/17 and being forced to use AM/PM again.

And while those are nice defaults for the separate regions, maybe some people would like to change it. Maybe I want my device-language to be German but I kinda like those slashes the people from the UK have and because I’m programming a lot I’m actually more used to having . as a decimal separator. So I just go to the system preferences and change my region to U.K. but keep the language as Deutsch.

In macOS you can even configure your own date and number formats to use, if you like. While this is not yet possible on iOS, who says it won’t be introduced with the next iOS version?

And that’s not all, I can also change the calendar. Maybe I want to try out an islamic calendar. There are several choices, I will go with the islamicTabular one and get 05.11.1438 AH for the date above. And while we are at it, if I change my language to arabic the number symbols also change, so it looks like this: ٥ ذو. ق، ١٤٣٨ هـ. I hope you all have browsers with proper unicode-support.

How to do it correctly

So, how can we support all the fancy configurations a user has made? If I can’t get the Locale-code from the language-file how am I supposed to figure out what the user wants? What Locale am I supposed to set on that date formatter?

Well, that’s actually really easy: Apple provides [NSLocale currentLocale] which contains all the settings the user made. So you can just use that. But you know what? If you create a new DateFormatter (or any other Formatter for that matter), that’s actually the default. So all you need to do to support all of this awesomeness: Don’t break it!

Do not set the locale property if you don’t know what you are doing and how locales work.